YOU Be the Behavior Consultant Series Test Questions

Copy and paste the test questions below for this series. Different track badges require members listen to various YOU be the Behavior Consultant episodes. Select test questions here. 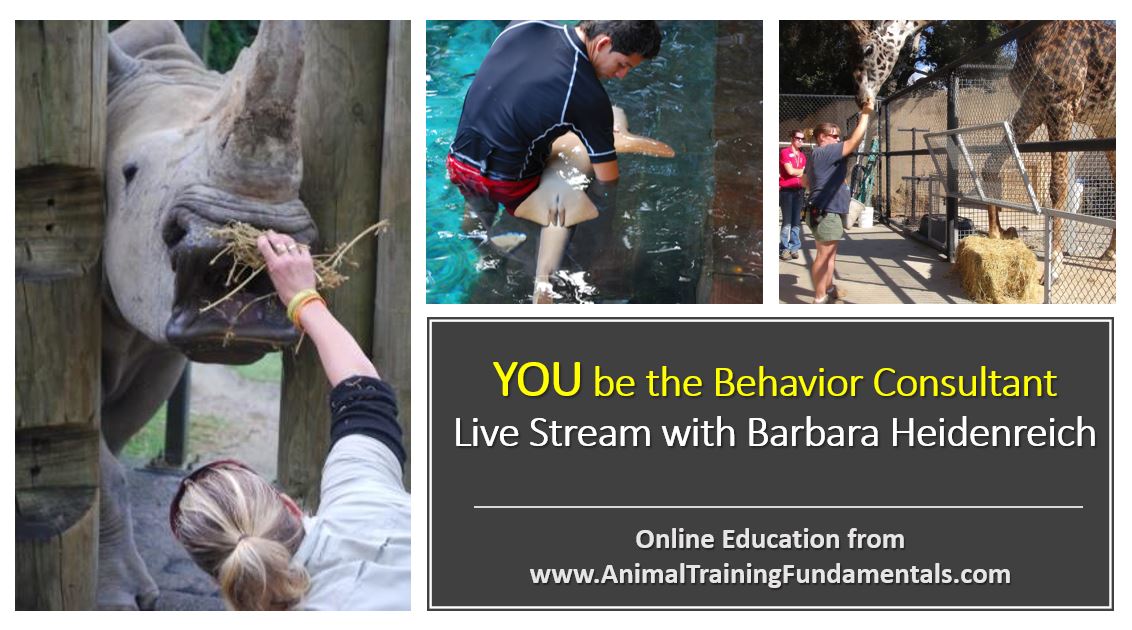 See all the YOU be the Behavior Consultant episodes here

1. What are the strategies used to address the problem of the young bear jumping up on people and grabbing at things in people’s hands and pockets?

2. What phenomenon do we see occur as a result of not reinforcing the vocalizations the bear offers? And what information does this confirm?

3. What are 3 things you could do to make it more likely an animal would curl its own hoof voluntarily without any manipulation or interference from humans?

4. Some animals respond to tactile as a reinforcer for training a hoof curl behavior TRUE or FALSE

5. In the first example, the elephant was likely to eat most anything handed to her. What was the strategy used to teach the elephant to hold a stick in her truck and wave it as opposed to eat it?

6. In the second example what were some of the elements of the shaping plan that helped facilitate training elephants to take oral medications voluntarily?

7. In the first example the tiger was hesitant to target consistently, what were 3 strategies that helped her have better success?

8. The lion barely acknowledged the target when he passed by it quickly, what are 2 strategies that help him learn to orient towards the target and understand that behavior earned desired consequences?

9. What was the shaping plan used to get the bear to shift since we were unable to physically access the door through which she needed to shift?

10. When training a behavior such as open mouth a common mistake is to. Choose one.

A. Use your hand as the cue

B. Talk at the same time

C. Try to brush the teeth

D. Work on two criteria at a time

E. All of the above

11. What was the foundation behavior that ultimately it possible to train a parrot to paint (bring a paint brush to a canvas on a easel) rather quickly?

12. How was this behavior also significant for the resident adult orangutans and also the juvenile orangutans at the Borneo Orangutan Survival Foundation? The adults are in protected contact and the babies in free contact which meant the behavior was useful in different ways.

14. In another example, a California sea lion was asked to do a number of behaviors and eventually left the trainer, name 3 strategies that were recommended to keep the sea lion engaged in the session.

15. Once the syringe (with no needle) is very close to the pectoral muscle of a parrot, what is the next approximation you would suggest to create contact with the syringe that is less likely to evoke a fear response?

Training for Resilience Against Aversives during Injections and Blood Collection

17. What are two things you can do to make it easier to collect blood from an animal?

18. What are three things you can do to reduce pain of needle insertion for injections or blood collection?

19. What were two things the trainers did that helped address the problem of the rhino swinging its hips out away from the fence line when backing up?

20. How did the trainers get the rhino to lift its back foot initially to reinforce this action?

21. What is an indicator behavior in discrimination training?

22. What behavior did the rabbit do to indicate it found the scented item?

24. For nebulization training for a parrot what 3 elements were relatively important. Pick three

25. When training orangutans for nebulization the goal is to feed or give juice continuously throughout the entire treatment TRUE or FALSE

Hangry Animals: What to Do?

26. What are things you can evaluate to give you information to determine if an animal has learned to present anxious behavior around food or actually needs more food?

27. What are three contextual elements that can influence an animals interest in what you have to offer as a potential reinforcer?

28. Because there will always be something in an enclosure for great apes to throw, what was one of the recommendations for a behavior to build reinforcement history for under less triggering conditions? The goal would be to later gradually introduce the conditions that in the past would trigger throwing and try to prompt this new behavior instead.

29. What steps did it take to get the bear to go from pushing/ throwing objects out of its path to placing its paw on the object?

A. Choose a halter or harness that the animal can put itself into

C. Start with bigger opening or modify so it is easy to put itself into and out of

D. Teach the animal to pick up the halter or harness and bring it to you

F. Train with a partner

31. Once the halter or harness is on the animal what are other aspects of the training do you need to take into consideration?

32. To teach a parrot to sing a song a cue you capture parts and then back chain the behavior TRUE or FALSE

33. What are 3 things you can do to make it more likely you can capture a desired behavior? Choose 3

A. Alter the environment so that it is likely the animal will easily present the desired response

B. Recreate naturally occurring triggers for the behaviors

C. Break it down into easier steps so the animal responds

D. Observe your animals. Notice the triggers for the behavior you would like to capture

F. Seize the moment! Grab any new behavior you see even in the middle of training other behaviors

34. Repetitive behaviors are best solved by adding more enrichment to the environment TRUE or FALSE

35. Which of the following questions might be helpful to ask when trying to address a repetitive behavior problem?

A. Are there identifiable triggers/antecedents for the behavior?

B. Can you identify reinforcers for the behaviors?

C. Is there body language that correlates to anticipation of delivery of desired consequences?

D. Is there body language that correlate to vigilance or anticipation of undesired consequences?

E. Is the behavior on an intermittent schedule of reinforcement?

F. Is there variance in the patterns of the behavior?

G. Is there body language indicative of pain?

H. Has the animal been evaluated for pain/health issues?

I. All of the above

36. Name 3 reasons we do use extinction in animal training?

37. What are some reasons to avoid using extinction in animal training?

38. If you were working with an animal for the first time, what are three things in addition to providing a desired item (such as food) you could do to build “trust”?

39. Animal training requires direct interactions with humans to be successful TRUE or FALSE

Not a member of Animal Training Fundamentals? Really?! Well, here's what you're missing out on...